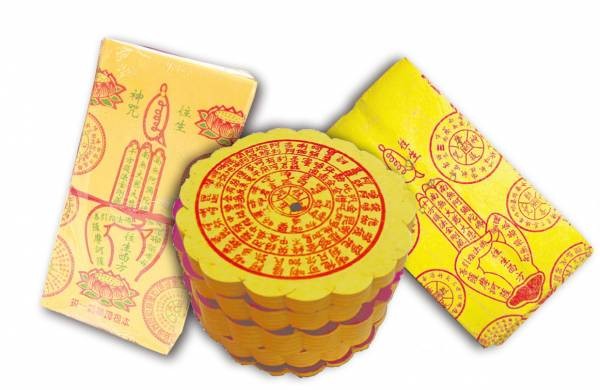 The practice of burning mantra paper money (往生纸//往生钱) to benefit the deceased is a Chinese folk culture that is contrary to Buddhism. Such a practice creates bad karma for both the living and the dead. The main issue being discussed here, is the burning of paper with printed Buddhist mantra.

According to Chinese folk beliefs, a person becomes a spirit or ghost after death and they live in the nether realm. There are ghost cities and towns with their ghost Kings and magistrates. Ancestors need to be remembered and honoured, just like how we practice filial piety towards our living parents.

According to the historical record of folk culture in China, the practice of burning paper money did not arise immediately after the invention of paper. Like many cultures around the world, real money was buried along with the dead. That is limited to the affluent people because the poor cannot afford to bury real money right? The practice of burying paper money with the dead started much later. Paper money is a mock representation of real money and it reflects the imagination of the needs in the afterlife.

Please note that until here, these beliefs are Chinese folk beliefs and has nothing to do with Buddhism. Furthermore, there was no burning of paper money yet. The poor folks in ancient China, bury fake paper money with the dead.

The burning of paper money probably developed after foreign religion, such as Buddhism was introduced into China. Some of these foreign cultures believe that fire is a medium or “spiritual portal” that enables objects of our physical world to be delivered to the spiritual world.

From the above, we should understand that burning paper money is a Chinese cultural practice that was invented by man and developed over a period of time through the influence of non-chinese culture.

Many Chinese ghost stories tell of deceased family or friends appearing in the dream of their living kins, asking for money or necessities of life. These haunting dreams only stop when the living person satisfy the demand of the dead by burning paper money, clothing, houses and even paper servants!

It is interesting to note that the ancestors of non-Chinese do not have such needs?

There are also stories of exorcism or appeasement ritual that were performed with the burning of paper money. How does it work?

If we consider my previous articles on the 36 types of ghost, perhaps the spirits were craving for smoke and mental associations instead. In that context, it is the smoking that is desired by these ghosts and definitely, not the shape of the paper offerings.

Here is where this cultural practice becomes enmeshed with some Mahayana Buddhist ideas. Typically, the mantra for rebirth in the Pureland of Amitabha Buddha is printed on paper. These papers are touted as “currency” that guarantee a safe passage to Amitabha’s Paradise.

Such mistaken beliefs arises because people are ignorant of Buddhism but hope that their loved ones enjoy the same benefits of practising Buddhist!

For a start, you cannot buy your way to heaven! It is an insult to Buddha if you believe He needs those paper money from you to sell you a lotus seat in the Pureland. To be reborn in the Pureland, one needs to have good karma and practice well.

The practice requires recitation and concentration. Burning 1000 pieces of mantra paper does not equal to 1000 concentrated recitation! You are only killing more trees and haring more living beings in the forest.

When one burns sutra or verses of sutra or mantra, it is an act of destroying Dharma. Sutra and mantra is a tool for practising Buddhist mind training. Burning them deprives others of an opportunity to read and practice. It also spread ignorance and promote unskillful actions. Bad karma!

The act of burning Dharma-related objects and rejoicing in that action, creates ignorance in one’s mind. That leads to more ignorance and that mental habit will carry over to one’s future rebirth. It is a karma that leads to future downfall (spiritual evolution)

Therefore, such a practise should be discouraged. While it is improper for us to comment on the cultural practice of Chinese, it is important to correct a misunderstanding about Buddhism.