Buddhist relations with the Gods

I watched the American Gods recently, an interesting TV serial and had been wanting to share this topic. Today, I just read a blog on Buddhist gods. So here’s sharing what I know.

Buddha is not a God. He advice us not to pray to Him for anything, including Enlightenment. He taught that we are responsible for creating our own happiness.

Buddha’s relation with the Gods and goddesses 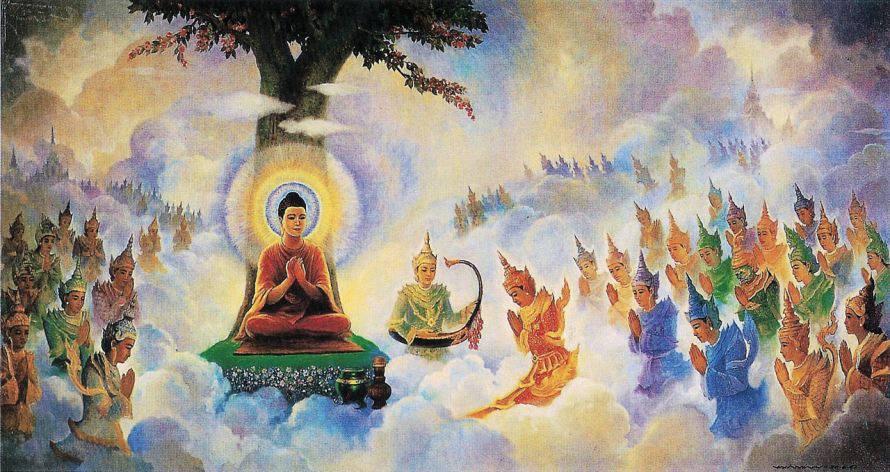 The Gods and goddesses were aware of the birth of Prince Siddhartha. A Bodhisattva capable of attaining enlightenment. They watched with great interest.

When Ascetic Siddhartha became the Buddha after Enlightenment, these celestial beings visited Him frequently and ask for his advice and teachings too. They also invited Buddha to their abode to preach. Buddha accepted their invitation and went there for a short duration of time. When Buddha returned to earth, he was accompanied by Gods and goddesses in respectful escort. His descend from haven to earth, attended by these celestial beings were witnessed by an entire city population. This episode in Buddha’s life is still being celebrated today by Buddhist around the world.

Some of the Gods had also volunteered and committed their services to protect the Buddhist doctrine and also Buddhists. Buddhist categorise them as Dharma protectors (护法神）

What Buddha taught about Gods

Buddha clarified that the gods are not responsible for our happiness or misfortune. Instead of praying to the Gods, we have to create the right conditions for happiness to arise. A monk once joked that the Gods would applaud this statement by Buddha. Otherwise, can you imagine the things that Gods have to do for the lazy human just because we put some food (which looks like scum to them) at the altar?

Buddhist does not believe that life / existence or the universe is created by a single or groups of Gods. Since we are not created by them, we do not acknowledge them as our master or creator. Therefore there is no master/servant or father/son relationship with them.

How does Buddhist view Gods?

In Buddhism, we acknowledge the existence of Gods and Goddesses. However, we believe they couldn’t care less about us most of the time. Whatever is happening to us is caused by our own karma and not caused by these beings toying with our life.

Therefore, nope, there is no God or goddess toying with us like puppets. So no need to butter up them.

The lives of these Gods and goddesses are extremely long. However, they also die and will also be reborn. When that happen, they can become a god again, or go “downwards” and be reborn a demi-god, a human, an animal, a ghost or a hell being. So when gods do something bad, they can be reborn in hell too. (Isn’t that fair?)

The place where gods are reborn is called haven for simplicity. According to the scriptures, there are 26 categories of havens. Each with their own unique characteristics. Each category of these havens can have their own leader and they can also have their own individual communities with their own leader. The beings born there also have their own unique appearance and characteristic. Not all beings in the universe looks like human and the gender is not just male/ female. They may or may not have a physical form too. They may not necessarily be hovering in the air 🙂

If we share the same teacher (Sakyamuni Buddha), then we are classmates. As mentioned in the Buddhist scriptures, many Gods believed in what Buddha taught and became a Buddhist too. Some even commited themselves to protect Buddhism as a mean of sustaining their good karma. That means, they will keep a look out for us if we are great practioners. There are many accounts of great Buddhist masters receiving aid from gods during a crisis in life.

Generally, Gods are gods because of their “goodness”. Therefore all gods adore goodness. If one is evil, there is no use seeking out the gods. If one is good, there is no need to do so. The Buddhist view gods beyond just culture, race, nationality, gender etc (something which our forefathers failed to escape, thus resulting in many disharmonies amongst humankind).

Buddhist develop loving kindness and compassion to all beings. (Including the gods.) We dedicate merits to them and wish them happiness too during our spiritual practices.

Buddha’s biological mother died within 7 days after giving birth to him and was reborn in one of the havens. He went there to teach her too.

After the Buddha gained Enlightenment, one of the Gods specially implored Buddha to teach.

During the Buddha’s time, his monastery were built away from the populations so that monks can have a peaceful environment to meditate. When the celetial beings visited him, people in the city witnessed the forested area around the monastery lighting up in the middle of the night.

A buddha before taking birth on earth will reside in the haven named Tusita. The next Buddha to come is Maitreya Buddha. He is currently in the Tusita Haven.

The main opponent of Buddha is Mara. Mara tried to sabotage Buddha’s effort in attaining enlightenment or preaching the Dharma. Mara is also a God in one of the havens.