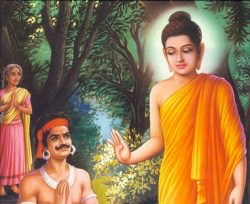 One of my favourite stories in Buddhism is Angulimala. Angulimala was a feared serial killer in ancient India who was tamed by Buddha and later became enlightened.

Angulimala wasn’t born a killer. He used to be a diligent and bright young man seeking spiritual insights. He followed a famous teacher to obtain higher eduucation. Angulimala was bright and learned fast. Consequently he became the teacher’s favourite and even surpassed his seniors. This created jeolousy amongst his class mates and they plotted against him. They staged an accusation that he was seducing the teacher’s wife. The plot was successful and Angulimala lost the affection of his teacher.

His teacher wanted Angulimala to leave his congregation and demanded that Angulimala to obtain a thousand fingers to complete his spiritual training.

With complete faith in his teacher, he proceeded to fulfill his “holy duty”. Not realising that was a ruse by his teacher to make him leave. Before long, he lost all reasoning and just wanted to fulfill his holy commandment and became a feared killer.

This story fully illustrates how a person’s mind can be exploited or corrupted by a wrong teacher. In the same story, Buddha became his saviour when He made Angulimala realise his mistakes and repent.

Here are some of the guidelines that I had learned in my earlier education and I hope it will be useful to all beginners of Buddhism.

Since it takes two hands to clap, the other part is about ourselves.