The following story tells the anguish of Kisa Gotami. 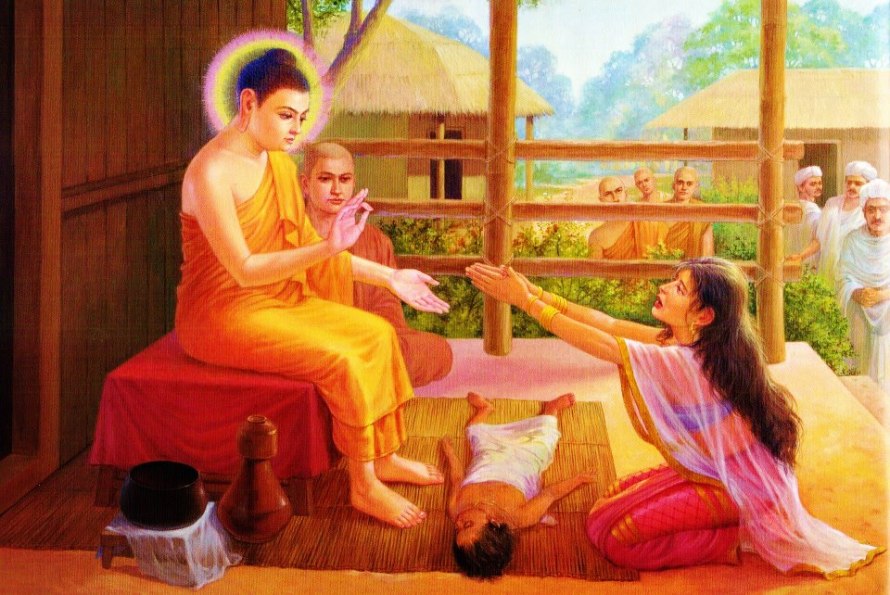 Buddha looked at her with compassion and calmness. He asked her to compose herself to make herself understood. People had gathered around the commotion. She regained composure and informed the Buddha that her baby is sick and unconscious. She wanted Buddha to save her only child.

Some of the bystanders were shaking their head sadly. This woman, Kisa Gotami had been running around the city asking people for help. Doctors had already informed her that the baby is dead but she wouldn’t listen. Someone must have directed her to Buddha for help.

Buddha said he could concoct a magic medicine to help her but he needed 5 mustard seeds (common household spice) from a family that did not experience death before.

She went from door to door, searching for 5 mustards seeds. However, all the families had experienced death in their family. The truth sank in and she returned to the monastery in the late afternoon. She was composed this time.

When she neared the Buddha, she prostrated at his feet and request for admission into the order of nuns.

She had seen impermanence, understood that it is a universal characteristic that everyone experience and she had come to terms with it.

She became a buddhist nun and attained enlightenment soon after.

In Buddhism, the emphasis of miracle is not on external compound phenomenon. The miracle that is important in Buddhism relates to a transformation of the individual mental state that lead toward Enlightenment.

Enlightenment is being free from the chain of endless rebirth. It is freedom from craving, hatred and ignorance. Thus it is a state free from fear and complete with joy.

A Buddhist that had developed wisdom is AWARE of this. They can recognise the subtle transformation going on in their mind. Their spiritual journey is meaningful and miraculous as they work within themselves.

Someone who used to be short tempered becoming patient and kind.

Someone who is constantly jealous of others transformed into a person who knows how to rejoice in other’s success.

An uncaring and selfish daughter or son becoming filial and kind to their parents.

A person clouded with fear becoming calm and at ease.

Positive transformation that makes each and every individual a better person. A miraculous transformation of the society, one by one. Turning this world into peace and happiness. Such are miracles that are worthy to be shared and praised.