In this art form, Sakyamuni Buddha display the Earth witness posture and it symbolise victory over Mara (Evil force)

The “halo” surrounding Buddha is actually two dragons flanking Him. They represents evil supernatural forces tamed by Buddha and then converted into guardians of Buddhism. This “Halo frame” defines the Chinnaraj art form.

This art form is favored by Thai Buddhist and is believed to bring success in life.  The hope is to convert adversities in life into favorable forces that help us succeed.

I think this is a very meaningful artform because it symbolise how we can transform negativities in life through applying the teachings of Buddha. Such as overcoming our enimies by loving kindness, overcoming unreasonable encounters with patience, etc. Of course, sometimes the worst enemy is our ownself and a positive change of our character can mean changing our fortune.

I like this series of art form because it’s like a personalized artwork relating to the day when you were born! It is kind of fun if you think of it. They all depict Shakyamuni Buddha on various commenorative occasions. Check out which day you were born in and see which one is your birthday Buddha! When travelling in a group, its fun to see friends making a beeline to their birthday Buddha.

The Artwork depicts Sakyamuni Buddha on the 2nd week after Enlightenment. He stood and meditated upon the Bodhi Tree that sheltered him during his quest for Enlightenment for 7 days! Without even blinking his eyes.

To me, that means appreciation and gratitude. A positive quality that mankind should have.

In the context of our modern world, I think it would not be far fetch to link this with appreciation and gratitude towards nature too.

I imagine the ancient masters employ this as a simple educational tool to educate the people about gratitude in life.

This Artwork is called pacifying the relatives.

It commemorate a fearless and brave act when Shakyamuni Buddha walked right into the middle of a battle field just before both warring states launched their arrows. He rose to the air (to attract their attention) After that he educated the kings of both states to treasure peace.

I think peace in life is a very important. To get the full story, one would have to listen to the discourses of Buddha to the kings of the warring states.

Again I imagine it would be a skilful way for Buddhist masters to educate his congregation about peaceful livelihood.

The mudra is named Vitarka. It denotes teachings and wisdom and bestowing the devottees to have good reasoning and logic. To see the truth.

In the resting posture, the artwork commemorates the Buddha subduing a gigantic and ferocious being without even bothering to rise up. To counter the size of the evil being, the Buddha transformed his body into a giant too. All done while in a state of tranquility and in a resting posture. How cool is that?

I guess the lesson is to remind us that when facing a crisis in life, it is best to follow the Buddha’s way and face them with calmness.

Note: Artwork on Parinirvana below. Compare with the resting posture above and you should see what I mean. 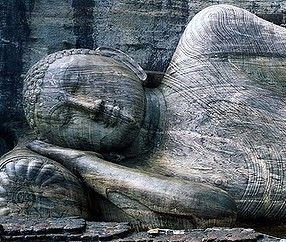 This artform depicts Sakyamuni Buddha on alms round. It narrates the time when Buddha first returned to his home town after his Enlightenment.

Before renouncing his layman life, Sakyamuni Buddha was a prince. Therefore his father, the King was appalled when he learnt that Buddha was begging for alms, door to door.

He asked Buddha not to beg from door to door as it is degrading to his birth rights since non of his royal ancestors ever begged for food.

Buddha duly informed his father that He is now the Buddha and he belongs to the noble line of Buddhas. The right livelihood of a Buddha is by alms.

Personally, I think this is a good story because it teaches us that jobs and vocations cannot be classified as inferior or superior as long as it is proper and does not cause harm to other beings.

This artwork shows Buddha in deep meditation after he decided to seek spiritual success through the middle path of not torturing his physical body or being too lax.

Buddha’s determination to attain realisation was marked by his resolve not to give up his meditation until he succeed.

“Though my skin, my nerves and my bones shall waste away and my life blood go dry, I will not leave this seat until I have attained the highest wisdom, called supreme enlightenment, that leads to everlasting happiness.”

I think this artwork teaches us to be firm and determine with our goals in life.

When I was studying hard for my exams, this resolution spurred me on whenever I failed any subjects or syllabus.

This artwork representing the Buddha contemplating how to educate the world about Enlightenment.

He reflected that Enlightenment is beyond descriptions and mankind is prone to their habitual tendencies to be opposite the state of Enlightenment.

In a way it is quite an impossible task to teach Enlightenment. That is why Sakyamuni Buddha is so special.

In a world where Buddha Dharma no longer exist. He had to formulate a method of education that gradually lead mankind towards Enlightenment again. That is why Sakyamuni Buddha is also known as the Samyaksam Buddha.

I think this artwork encourages us to have compassion and act for the welfare of others.

It also remind us on the limitless wisdom of Buddha as an educator of mankind.

This artwork celebrate an event just after Sakyamuni Buddha’s enlightenment.

There was a huge storm and a large Naga king named Muchalinda formed a sheltered seat using it’s own body to shelter the Buddha against the storm.

I am always awed by this image because a ferocious looking snake with 7 or 9 heads turned itself into a canopy and seat to serve Buddha.

I think it is a great educational tool to teach us that Buddha is not just an ordinary man but someone so special that even supernatural beings do not hesitate to serve him.

So which one is your birth day Buddha?

This image is called Allaying of fear.

Basically, it isn’t hard to imagine the Buddha asking you to calm down with this iconagraphy.

Some Buddhist believe that this artwork stops all evil from entering the premise where it is being honored.

The mudra of the artwork is known as abhaya mudra

Similar mudra is also depicted on the walking Buddha or the standing Buddha like below. In that artwork the story to relate to is the subduing of the mad and drunken elephant king.

If the artwork depicts a standing Buddha with the other hand down and palm facing out to the viewer (3rd picture below), that means bestowing of blessings. Thus it is also favored in homes and business location like a restaurant or office. Variant in artwork may result in the blessing hand holding some symbolic articles that represents health etc.

It is interesting to note that Buddhist still find ways to portray their earnest hope for a fearless, peaceful life with abundant good health and blessings through expression in their artwork.

Even though Buddha taught not to be idol worshipper 🙂

Anyway, hope you enjoy your visit to Thailand and have fun looking at Buddha statue in various temples.

Will try to share about Buddha statue in other part of the world soon.