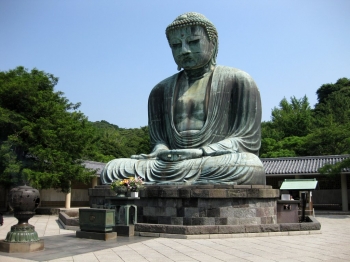 Let us explore this Mahayana Sutra that is one of the corner stone of Pure land practice. I am skipping any introduction and diving right in.

Buddhist sutra or Sutta always start with this line. This is because the 1st recitation was done by Arhat Ananda or other enlightened monks after the Buddha’s parinirvana. At that time, a council of enlightened monks convened a meeting and Ananda was requested to recollect all the teachings of Buddha. Ananda was the best candidate because he was Buddha’s personal attendant and was present in all the sermons. Furthermore, his memory is superb.

The recollected sermons were further verified by the other enlightened monks as being Dharma. These sermons were then remembered and preserved through the ages by recitation practices from generation to generation. In the ancient past, chanting was a form of archiving or recording. Knowledge was successfully preserved in that manner.

一时，佛在舍卫国，祇树给孤独园。Once Buddha was in the land of Shravasti, in the garden of Jeta and Anathapindika

Next part of the sutra account for where the sermon was delivered. In the past, this help provide some degree of authentication because in the ancient world, people outside India are unlikely to be familiar with names of ancient Indian places.

In this case, this sermon was taught at Jeta Grove. Jeta Grove was donated by Anathapindika, who purchased it at exorbitant price from a prince. Anathapindika had to cover every inch of the desired ground with gold pieces and offered those gold pieces to the prince.

This reflects the preciousness of Dharma in the eyes of an appreciative disciple. While our material possession will be lost to us upon death, the precious dharma remains with us and will free us from the sufferings of samsara.

与大比丘僧，千二百五十人俱，皆是大阿罗汉，众所知识。He was accompanied by twelve hundred and fifty great Bhikshus, all of them great Arhats, well known to the assembly.

Shariputra – the disciple who was foremost in wisdom and he would sometimes help to instruct junior monks. It was said that his explanations were very helpful in leading beginners to realise Sotapanna stage of enlightenment.

Maudgalyayana – the disciple who was foremost in supernormal abilities. Due to his clairvoyant ability, he was helpful in assisting Buddha to instruct advance practitioners who were struggling with meditation.

Maha Katyayana – foremost in elaborating brief statements made by Buddha. This demonstrates his attainment of being synchronized with Dharma (enlightened) and also an ability to transform it into easily comprehensible words for his audience.

Mahakausthila – foremost in answering and questioning (surpassing mundane logic). He was the maternal uncle of Shariputra. Prior to becoming a Buddhist, he was a champion Brahmin debater. His debating career ended when he lost a debate to Buddha, thus becoming Buddha’s disciple.

Suddhipanthaka – Foremost in steadfast practice that accord with the essence of the instruction. He was the most dim-witted disciple of Buddha. Buddha taught him a practice that involves sweeping the floor and repeating the phrase “sweep clean” His devotion and diligence in practice, resulted in his enlightenment. It is worth noting that the practice of chanting meditation follows this method too. In such practice, we simply repeat a mantra without allowing our mind to think too much (Just like a dim-witted Suddhipanthaka), while performing our daily chores.

Nanda – Foremost in handsomeness. Also known as Sundarananda (not to be confused with the cowherd Nanda in Lotus Sutra). He was Buddha’s half brother because they shared the same biological father. He was very in love and attracted to his beautiful wife. Buddha took Nanda to Tavatimsa Heaven to show him the heavenly nymph. Consequently, Nanda lost interest in his marriage and was totally enamored with the heavenly nymphs. He decided to become a monk because he wanted to be reborn in Tavatimsa Heaven by merit of his monkhood. When other monks mocked him for having a lewd motivation; he renounced lustfulness and attained enlightenment. It is worth noting that many Pure land practitioners are motivated by a desire to take rebirth in Amitabha’s paradise. In that aspect, our initial motivation is similar to Nanda. As noted, even a lustful desire can turn into enlightenment through dharma. In comparison, most Pure land practitioners have a “cleaner” motivation to begin with 😉

Rahula – Foremost in Secret Practice. Rahula is the biological son of Buddha and joined the order as a child. He made it a point not to disclose his progress to others and constantly kept a low profile. Instead of prominently being the Buddha’s son, his conduct resulted in his being “forgotten” by fellow monks. Likewise, our practice should be secret and not boastful. There is no need for us to wear dharma clothing to office or be perceived as an important or serious practitioner.

Gavampati – Foremost in receiving alms from Angels. He was specially instructed by Buddha to beg for alms in heaven and to eat his food there. Gavampati had spent 500 lifetimes as a cow and thus could not get rid of his unsightly eating habits. If he were to receive alms from human beings, people might ridicule his eating mannerism and that would result in his donors incurring bad karma. On the other hand, the heavenly beings will not have such an issue because they can clearly perceive that Gavampati is an enlightened being. (this is a Mahayana account) The Theravada account simply state that Gavampati’s previous life was in heaven and preferred to spend his time hanging out in his former abode after enlightenment. In one instant, Buddha sent him to stop a flash flood and he stopped the water in mid-flow, resulting in a “wall of water” building up like a great mountain peak. (That is the Theravada account)

Pindola-bharadvaja – Foremost in merits. According to Buddhist legend, he was instructed by Buddha to abstain from entering Parinirvana and remain in the human realms incognito. This is to allow future Buddhist an opportunity to offer him alms. That is why he is foremost in merits. Separately, he was once rebuked by Buddha for displaying a miracle to win a contest. The prize being a sandalwood begging bowl that was hanging atop a tall pole. He actually went through the trouble of levitating at a busy market place to retrieve that begging bowl!

Kalodayin – Foremost in correctability. He was Buddha’s tutor in the palace before Buddha renounced his kingdom. He was infamous for being lustful and preferred to mix with women and behaving so intimately that it borders indecency. Finally, Buddha instructed him personally and acted as chaperon to ensure his good behavior. He quickly attained enlightenment under Buddha’s personal supervision.

Mahakapphina – Foremost in Astronomy. Being aware of the secrets of the universe.

Vakula – Foremost in longevity. He lived 160 years without any serious ailments.

Until here, we should understand that the enlightened arhats were present when Buddha taught this sutra.

Besides Bodhisattva, celestial beings such as Shakra (King of Gods) and his retinue were present for this teaching. Likewise, the heavenly beings from the various other heavens.

Hope you enjoyed this reading.

Translated text in English is from http://www.buddhasutra.com/files/amidasutra.htm